Genesis: The history of Cain and Abel. 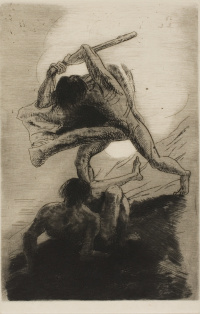 And Adam had sex with Eve his wife: who conceived and brought forth Cain, saying: I have gotten a man through God. And again she brought forth his brother Abel. And Abel was a shepherd, and Cain a husbandman. And after many days, Cain offered, the fruits of the earth, as gifts to the Lord. Abel also offered of the firstlings of his flock, and of their fat: and the Lord had respect1 to Abel, and to his offerings. But to Cain and his offerings he had no respect: and Cain was exceedingly angry, and he lost his composure.

And the Lord said to him: Why are you angry? and why did you lose your composure? If you do well, shall you not receive? But if you do badly, shall not sin be at the door? But lust shall be under thee, and you shall have power over it. And Cain said to Abel his brother: Let us go. And when they were in the field, Cain rose up against his brother Abel, and slew him. And the Lord said to Cain: Where is your brother Abel? And he answered, I don't know: am I my brother's keeper? And he said to him: What have you done? The voice of your brother's blood cries to me from the earth.

Now, cursed shall you be upon the earth, which has opened her mouth and received the blood of your brother at your hand. When you shalt till it, it won't give to you its fruit: a fugitive and a vagabond shalt you be upon the earth. And Cain said to the Lord: My sin is greater than that I may deserve pardon. Behold you cast me out this day from the face of the earth, and I shall be hidden from your face, and I shall be a vagabond and a fugitive on the earth: every one, that finds me, shall kill me. 2 And the Lord said to him: No, it shall not be so: but whoever shall kill Cain, shall be punished sevenfold. And the Lord set a mark 3 on Cain, that whoever found him should not kill him.

And his brother's name was Jubal; he was the father of them that play upon the harp and the organs. Sella also brought forth Tubalcain, who was a hammerer and artificer in every work of brass and iron. And the sister of Tubalcain was Noema. And Lamech said to his wives Ada and Sella: Hear my voice, you wives of Lamech, hear my speech: for I have slain a man 5 to the wounding of myself, and a stripling to my own bruising. Sevenfold vengeance shall be taken for Cain: but for Lamech seventy times sevenfold. Adam also knew his wife again: and she brought forth a son, and called his name Seth, saying: God hath given me another seed, for Abel whom Cain slew.

But to Seth also was born a son, whom he called Enos; this man began to call upon the name of the Lord. 6

This translation uses Douay Rheims as a base, and modernizes the language (i.e thee and thou become you)
1"Had respect": That is, shewed his acceptance of his sacrifice (as coming from a heart full of devotion): and that, as we may suppose, by some visible token, such as sending fire from heaven upon his offerings.
2His guilty conscience made him fear his own brothers and nephews; of whom, by this time, there might be a good number upon the earth; which had now endured near 130 years; as may be gathered from Gen. 5. 3, compared with chap. 4. 25, though in the compendious account given in the scriptures, only Cain and Abel are mentioned.
3The more common opinion of the interpreters of holy writ supposes this mark to have been a trembling of the body; or a horror and consternation in his face.
4"His wife": She was a daughter of Adam, and Cain's own sister; God allowed such marriages in the beginning of the world, as mankind could not otherwise be propagated. He built a city. In process of time, when his race was multiplied, so as to be numerous enough to people it. For in the many hundred years he lived, his race might be multiplied even to millions.
5"I have slain a man": It is the tradition of the Hebrews, that Lamech in hunting slew Cain, mistaking him for a wild beast; and that having discovered what he had done, he beat so unmercifully the youth, by whom he was led into that mistake, that he died of the blows.
6 "Began to call upon": Not that Adam and Seth had not called upon God, before the birth of Enos; but that Enos used more solemnity in the worship and invocation of God.